The Body Wand Original is a mains-powered dial-controlled wand-style personal massager, sleeker and less bulky compared to its best known predecessor, the Hitachi Magic Wand. The Body Wand comes with either a UK or USA plug attached, depending on where you purchase it. The Body Wand’s head is covered with a smooth firm vinyl, rather than a plushy textured head. I’d expect this to really let the Body Wand’s power show through, emitting strong vibrations throughout its head; a plushy coated wand tends to dampen vibrations. I was interested to see whether or not my hypothesis in regards to better transmission of vibrations was correct.

The Body Wand Original arrives in a fresh looking white and blue box, with various product images printed onto it. The packaging appears incredibly innocuous, meaning that you could easily get away with passing it off as a general body massager. On the back of the box you will find a labelled diagram stating key features. The box states the head of the toy is coated in a high quality soft-touch material, but in reality it feels fairly firm. The toy has a one year warranty. The wand rests inside a plastic tray. There are no instructions with the product – with past massagers I’ve received, they have always came with instructions, often covering where and how to use a wand massager and warning of the extreme vibrations the toy produces. Ok, these things may be obvious to some, but I’m still a little surprised that the Body Wand Original doesn’t come with any additional information, other than what’s on the box.

The product is relatively large, but considering its size it feels lightweight and well balanced. The majority of the toys weight is focused towards the head, meaning that you should easily be able to apply firm pressure when using the product. The toy is 13 inches in length with a 2.25 inch long vinyl coated head, and a 0.75 inch sprung plastic-coated stem. The vinyl coated head is 7.5 inches in circumference and has a smooth domed tip. Running around the edge are 5 grooved rings which offer extra stimulation during use, as well as making certain that any attachments used will stay firmly on. The vinyl head is securely attached to the toy and seems impossible to remove. The stem can be flexed to around 60 degrees to its side, and wibbled around 360 degrees. The stem doesn’t flex too easily, giving you firm control over the device. Over-flexing the stem reveals noticeable gaps between it and the head of the toy. The body of the wand is made from a glossy plastic, with a band of textured plastic around its centre. The textured plastic makes grasping the toy much easier than past wands I’ve used. There is a gap running along the body of the wand which can trap dirt. At the back of the toy there are sinkholes in the plastic where screws are recessed. There are also air vents to help prevent your wand from overheating, and burning out the motor. The power cord leads out of the base of the toy, and is approximately 75 inches long. The cord seems loosely fitted into the toy and rattles a bit during use, but I doubt it will come out. 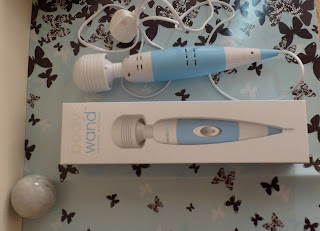 The wand is controlled via a dial, which rotates smoothly upon its spindle. The switch works in reverse to what you’d naturally expect, scrolling away from the head of the toy – you’d normally scroll in the direction of the tip of the toy to increase power. Once the dial clicks on you can smoothly rotate the dial to fit the vibrations you desire. The toy’s vibrations start at a low rumble, still much more powerful that a standard vibrator, and can be upped to an intensely strong vibration which travels throughout the whole toy. The dial stays firmly where you leave it; on some toys the intense vibrations can cause their controls to move around uncontrollably. 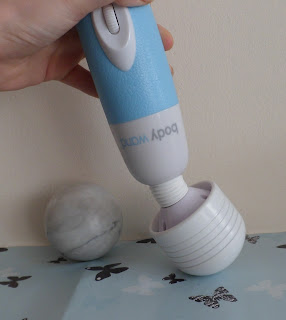 When using the toy you will need to apply some water based lubrication to make the experience more enjoyable. During use I found that the vibrations travelled throughout the head of the toy much better than on other wands I’ve tried. However, like most wand vibrators I have used, the vibrations felt the strongest on the side of the head, rather than at the tip of the dome. I enjoyed being able to take full advantage of the various vibration intensities, offering a more customisable experience than using a toy with pre-set modes. Being able to speed the vibrations up by a flick of the dial as I reached climax, and then scrolling down to the lower, more rumbly intensities as I came down from my euphoric high, meant that I was able to enjoy multiple orgasms in rapid succession. Fiddling with controls often dampens the mood, but this dial is just so easy to use. 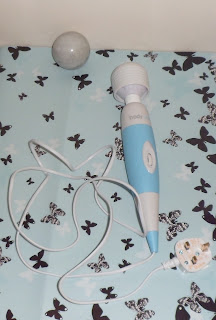 When cleaning the Body Wand, make sure you pay extra attention to cleaning around the air vents, neck, the dial, grooves on the head, and manufacturing gaps, as these can trap dirt. I’d recommend washing the Wand with a damp cloth/antibacterial wipe, and avoid submerging it under water – especially the plug socket.

The Original Body Wand is a superb step up from the entirety of my past wand massagers. Not only is its lightweight construction and adjustable dial control fantastic, but it is significantly more powerful than all my other wands. The only real change I would like to see with the Body Wand Original is for there to be fewer gaps for dirt to become trapped in. Essentially, if you are looking for a devilishly powerful wand that gushes geysers of pleasure and provides tantalizing vibrations, then the Body Wand Original is a fine choice.