The Body & Soul Remote 1 is a radio controlled vibrating love egg with an LCD display remote, reminiscent of an iPod, manufactured by California Exotics. Both the remote and vibrating egg are battery powered. The Body & Soul range of sex toys are marketed as one of those simple luxuries for everyday life, which are meant to encourage you to embrace life.
The Remote 1 arrives in a white cardboard box with various bits of text printed onto it in different fonts; you will also find a few product images. Although there’s quite a lot of written information to take in, it’s probably some of the easiest to absorb I’ve seen on Cal Exotics’ packaging. Rather than their usual approach of fanciful fonts dotted seemingly at random around a picture of the product, the product information is supplied in boxed, bulleted lists, in a selection of languages. The list states that the egg is waterproof; it’s important to note that, by omission, the remote isn’t. The remote and egg are both battery powered. The egg uses two N batteries, and the remote requires one 12V battery – these are provided with the product, but it is advisable to remove the batteries whilst not in use to reduce power drainage. The packaging claims that the product is made from skin safe materials, consisting of ABS plastic with metallic plating and a PU coating. It is recommended that you only use water based lubrication with this toy. 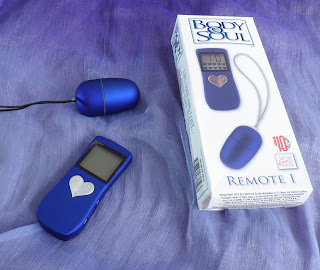 The product offers 10 modes of vibration, consisting of 3 continuous vibration modes of moderate strength, and 7 modes of escalation and pulsation. The vibrations are controlled via a radio remote which is operated by a push button control, and features a sliding switch travel lock. The remote is lightweight but sturdy; it is 3.5 inches long and 1.5 inches wide. The remote’s case is slightly curved to make it easier to grip. On the back of the remote your will find the brand name printed, as well as a slide-off battery cover which clips firmly into place. Before turning the remote on you will need to slide the travel lock switch into the ‘On’ position, which seems rather counter-intuitive. This lock is located on one side of the device. Below the screen there is a heart shaped keypad with ‘-’, ‘+’, and a power symbol engraved into it. When the remote is on, the LED screen will show which setting you are on, from 0-10. Underneath the mode’s number, various hearts will show up in different patterns depending on the mode. So far I haven’t determined why the hearts appear on the screen, as they don’t seem to have any relevance to the mode’s vibrations. Perhaps it is merely for some visual entertainment. 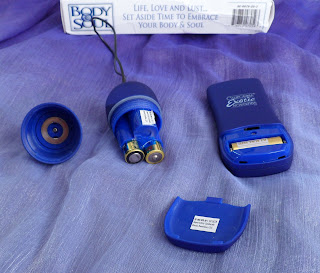 The egg is made from a PU coated ABS shell, with a plastic coated wire loop. The egg is in the traditional bird’s egg shape, offering a slight tapering towards its tip. The retraction cord is a total of 5 inches in length, and is bendable. The plastic coating on the wire can be damaged through over-bending, and this could lead to exposure of the metal wire, which acts as the radio signal receiver. The egg is a maximum of 2.5 inches in circumference and 4.25 inches of length. The egg can be separated into two parts, allowing access to the battery compartment. To insert the batteries simply untwist the egg and slot the batteries into the two cylinders of the chamber. You will notice a closed off cylinder to one side of the egg; this contains the vibrator’s motor. When twisting the egg back together try and remember the whereabouts of the motor, as the vibrations will be felt strongest this side of the egg.  Also, make sure the plastic washer between the two sections of the egg sits smoothly. With both batteries inserted, the egg weighs 50 g. 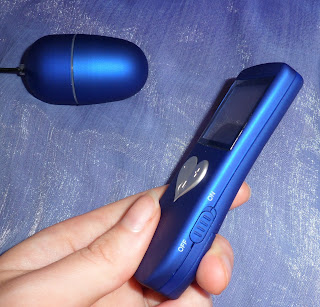 When using the egg, I found I needed a small amount of additional lubrication and foreplay prior to insertion. The egg itself can be used as a mild clitoral stimulator to help prepare your body. Whilst inserting the egg I experienced hardly any discomfort as the PU coating, once lubricated, produced very little drag. The egg sat a few inches inside my vagina and within close proximity to my G-spot. However, due to its shape the egg wasn’t able to rest smoothly against my G-spot. The cord, for the most part, resided comfortably outside my body. Occasionally the length of the cord became a slight annoyance. 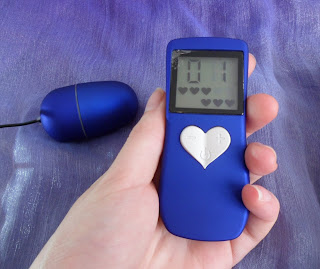 I moved the travel lock into the ‘On’ position, and then pressed the power button. The remote’s screen flashed ‘0’ so I clicked the ‘+’ button. The egg vibrated softly inside me. I then clicked the button until I reached the 3rd and most powerful continuous vibration mode. I was able to feel the vibrations travel well throughout my vagina, offering pleasurable stimulation.  I flicked the travel lock into its ‘Off’ position, which meant the egg could keep vibrating away even if the buttons on the controller were accidentally pressed. After a while, I tired of the continuous vibration modes and flicked the travel lock into its ‘On’ position. The remote had forgotten the last setting it was on before using the travel lock, although the egg kept vibrating away, so I had to use the off button and then start from scratch. This irritated me slightly, as you would’ve hoped the egg’s remote would contain some form of memory chip. I found the egg was the wrong shape and slightly lacking in power, so it wasn’t able to cause me to experience a G-spot orgasm, but the vibrations were pleasurable enough to work as excellent foreplay. When removing the egg it produced a slight popping sensation which caused mild discomfort.
When using the remote, I found it only worked when at a similar height to the toy’s retraction cord. The toy’s radio range is better than most, and is even able to work through several walls, and up to at least 6 metres.
Cleaning the egg is easy as it’s waterproof; simply wash it in water with antibacterial soap. After the toy is dry make sure you remove the batteries from its internal chamber. In the unlikely event the remote becomes dirty, simply wipe it down with a slightly damp cloth, as it isn’t waterproof.
Overall, the Body & Soul Remote 1 vibrating egg is a fairly average egg; it has decently powerful vibrations and an unusually impressive remote wireless range. I like the fact that the remote has an LCD screen, as a lot of eggs have no indication as to which vibration mode you are currently using. Also, I like how the remote has a travel lock, as I feel this is an essential feature when using a product out and about, as you can casually slip it into a bag or pocket without fear of accidentally activating the buttons. However, I dislike how the travel lock causes the remote to forget the current mode it’s on, even though the egg continues to buzz away at its last setting.