The Evi arrives in red lace bag, covering a solid white and red box and a removable cardboard sleeve, with product images and information printed onto it. The box opens at the front by a magnetic latch; the box is solidly built and has the brand name printed on it in silver twice. Inside the packing you will find an instructional pamphlet detailing how to use and clean the Evi, and an educational diagram showing how to position the product during insertion. The Evi’s packing including the lace storage bag are unsuspicious, yet very large compared to the product size. The item is resting in a plastic tray, which is removable. 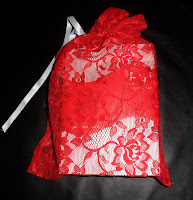 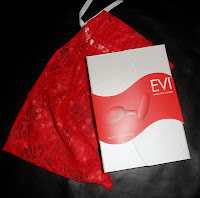 The Evi is a rigid product coated in a velvety smooth coating of silicone. It lacks any form of flexibility. The Evi’s shape is unique; to the uneducated eye it appears similar to a butt plug, with its base flaring outwards after its inch stem. Its shape also oddly reminds me of a chicken’s wing or wish bone – could this be an evolutionary step up from the good ol’ kegel egg? The head of the toy is a bulbous egg shape measuring 2.5 inches in length with 4.52 inches in circumference. The egg is sitting on top of an inch stem with 1.5 inches of girth. The egg tilts backwards at approximately at a 60 degree angle from the straight vertical stem shaft. Jutting out from the stem is an arching leg, aimed to function as an anchor as well as a clitoral stimulator; this juts out 2 inches from the stem and is a total of 2.75 inches. It should stimulate anyone’s clitoris which is located up to 2 inches away from the vaginal orifice. There is a very mild manufacturing seam found running around the silicone, it’s hardly noticeable when stroked. The silicone causes very little drag when rubbed against dry skin. At the base of the Evi, you will find the brand name moulded in raised silicone letters on one side, and their website address on the opposite. 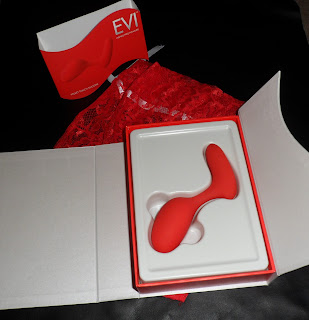 The Evi is controlled by natural thrusting and clenching motions which you’d naturally use during coitus. The instructions provided suggest the following:

Thrust your torso upwards whilst lying on your back.

Twist your hips side-to-side whilst grounding your body during a sitting or lying position.

When using the Evi only a small amount of additional lubrication and foreplay was needed during insertion. Due to its ovoid shape, and contoured angling, the main body of the product slipped into my vagina comfortably. As it positioned itself, the Evi made noticeable contact on my G-spot and softly stroked it. When using the Evi as a kegel device I slowly started to clench my pelvic floor muscles. The product noticeably moved up and down inside of my vagina, as my pelvic floor muscles clenched and proceeded to release, I found the products weight reassuring. The external clitoral stimulator anchored the product, and helped rock the inserted bulb with rhythmic melody, along my body’s natural pulse. The external clitoral arm sadly wasn’t the correct texture to offer any noticeable stimulation to my clitoris and only just managed to reach it. The external extension snuggled between my labia, contributing gentle stimulation to each lip. I found that when purely applying standard pelvic floor clenching and releasing, that the toy didn’t really lead to an orgasmic climax – G-spot or clitoral. However, the toy did noticeably work-out my pelvic floor muscles and was able to stay inserted better than many other Kegel devices I had previously tested.

I decided to try and apply thrusting motions along with rhythmic Kegel clenching. Firstly I tried lying down and raising my hips as I thrusted, next I tried the torso twists the booklet instructed. I still wasn’t able to reach climax. I then tried sitting and rocking the base against a chair seat, this motion rocked the bulb more than my previous efforts but still didn’t lead to climax. During the seated position the clitoral stimulator jabbed into my vulva uncomfortably. Frustrated by other reviews claiming this device induced earth shattering orgasms, I kept trying variations of thrusts twists, and pelvic floor clenches. Attempting even activities such as yoga, and more extreme, hula hooping. I still didn’t reach climax.

I took my time with the device. Rather than stressing over the lack of orgasm during use, I started to focus on the toys ability to make my general awareness of my body’s arousal more evident. I was able to notice areas of my body become more sensitive, even some which I had very little awareness of prior to using the device. I was able to enjoy the fundamentals of foreplay. Leading to one of the most pleasurable warm-ups prior to full masturbation/coitus, I had experienced in a long time. Because of this, I’d recommend the Evi to anyone who wants to learn more about their own body. 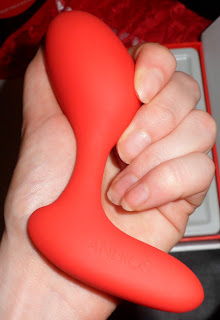 The natural contours of the Evi also make the toy an excellent butt plug. The egg tilts back into the rectum comfortably. Due to the type of silicone only a slight amount of drag occurred during insertion, meaning it needed less lubrication than some products. The bulb popped past my sphincter at ease, and the narrow stem travelled up into my body, whilst the egg nested above my pelvic floor muscles. The clitoral arm acted as an effective base, but also anchors the toy. I was able to move the product with my pelvic floor muscles, rocking it back and forth, for gratifyingly hands-free stimulation. Due to the length of the clitoral arm, I was unable to use additional toys vaginally as it obstructed my orifice. However, I believe the clitoral arm would work effectively at stimulating the male perineum, and possibly the male prostate too. I also feel that it could be used safely as a way for men to work out their pelvic floor muscles and become more aware of them too. I found the product slightly difficult to remove once inserted anally.

The Evi can be cleaned with your standard antibacterial wash and water, boiled, a 10% bleach solution, sterilised, and even placed into the dishwasher. You may need to provide some additional attention to cleaning the raised text on the clitoral arm, as dirt can reside around here.

Overall, the Evi and I didn’t have the most fruitful of starts. Yet after taking a step back to reassess the device, I now believe it could be an excellent product for those wishing to learn more about their body. Not only is it one of the easiest Kegel devices I’ve used, due to its ergonomic shape fitting the body correctly, meaning it’ll stay inserted without quibble (a lot easier than many Kegel dumbbells). The Evi helps you become more aware of your body’s natural levels of arousal, potentially leading to an intense orgasm, and a happier sex life.

Thank you to Lovehoney for providing me with this kegel device for my review. You can purchase the Evi here.

One Response to "Aneros Evi"