You are here: Home › Uncategorized › Amuse-G Amorous
I purchased the Amuse-G Amorous, as I liked the idea that it could possibly stimulate my G-spot and clitoris at the same time. The curve of the toy appeared as if it would be perfect for stimulating the G-spot, and I thought that the clitoral stimulation protrusion could add an interestingly different form of stimulation to the standard rabbit vibrator. It seems to me the clitoral stimulation area is moulded like a thumb, making me think that it would offer slightly more realistic massaging motions when pressing on the clitoris. Sadly this toy doesn’t seem to be up to my expectations of a dual stimulation vibrator.
The toy arrives in a funky looking box, with computerised pink text and sex related pictures scattered over it. At the front of the box there is a clear plastic window revealing the product within. The back of the box has two cardboard flaps that are held together by a magnetic latch; once opened these reveal another window with the toy inside. I guess this would be very convenient when purchasing the toy from a high street store, as you can easily get a good glimpse of its shape and style without removing it from the packaging. Inside the box the toy is held in place by some clear plastic packaging, from which it is easily removed. 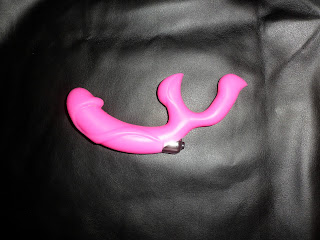 The toy is made from firm silicone. There is a mould line running round the toy, which in places can feel slightly rough. The texture of the silicone can cause friction when rubbed against the skin and also feels very dry, so I would recommend using additional lubricant with this toy. The shape of the toy reminds me of the Fun Factory Curve; the head of the toy is the same shape and it has the same wave-like textures on each side. Unlike the Fun Factory Curve, this toy is firmer, smaller, can vibrate, and has a clitoral stimulator and handle. The toy measures 7 inches in length with approximately 4.5 inches of insertable shaft. The girth of the toy is just over 4 inches at its widest point, which is the raised area on the glans-like head. At the base of the toy you will find two extensions – one can be used to stimulate externally while the main shaft is inserted; the other can act as a comfortable handle. I’ve read that some sites suggest you can use the lower end of the toy to stimulate yourself anally, while the back of the clitoral stimulator massages the perineum. I personally would avoid using the two base protrusions to stimulate either anally or vaginally, as at the back of both these areas there are two rather sharp feeling juts which can scratch the skin. At the centre of the toy there is a bullet inserted into a hole. Before use you will need to remove the bullet so you can unscrew it, to take out a plastic disc blocking the battery connectors. When removing the bullet I found that a small amount of the silicone broke away from the entrance to the bullet chamber. The product information states that the toy takes one AAA battery, but it actually uses three LR44 batteries which are provided. Pushing the bullet back into the main shaft is easy.

When using the toy, I found that additional lubrication was needed to make insertion more comfortable. I actually thought that this toy would work better than the Fun Factory Curve due to it being smaller and firmer, but I was wrong. The firmness of the toy made the raised area on the head of the product feel even more uncomfortable than the Fun Factory Curve, even though it was a fraction of the size. The toy only seems vaguely comfortable if my body is already extremely aroused. When inserted I found that the toy would occasionally stimulate my G-spot, but the clitoral stimulator would often rest too high to offer any pleasure. I found that the vibrations travelled through the toy, but didn’t really help me reach climax. I did try using the toy in a rocking motion, as I felt this would be easy due to how the handle is shaped; I also thought that this would be the best motion for me to gain full advantage of the dual stimulation to the clitoris and G-spot. When used in a rocking motion I found that the toy bent too much, because of where the slot for the bullet is positioned. When using the toy in a thrusting motion, I found that the raised area on the head caused discomfort unless I was extremely aroused. When aroused and thrusting with the toy I found that it did offer some pleasure, but not enough to make it worth the time and effort reaching that stage compared to when using other G-spot toys. 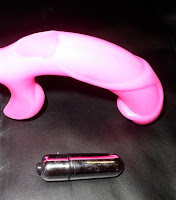 When using the toy with the vibrator turned on, I found that the noise level of the bullet was somewhat loud. The bullet is a single speed vibrator, and seems stronger than some. I found that while the toy is inserted the bullet can be very difficult to turn on and off, meaning that it is easier to remove the toy from your body before switching it on or off.
When removing the toy I found that the raised area on the head would sometimes cause slight discomfort as it popped past the vaginal entrance.
Cleaning the toy is easy, especially as the bullet is splash proof. But be careful not to scratch yourself on the rough pointed areas on the toy near the base, as I’ve done this a few times when washing it in antibacterial solution and water.
Personally I didn’t get along with this product at all. Part of me wonders if it’s just this particular type of toy shape that my anatomy dislikes when it comes to stimulation. However, there are still the issues of the toy having some problem areas, such as the sharp edged silicone, and being tricky to turn the bullet on/off while the toy is inserted. Even though this toy didn’t really work for me, other people may have better luck with its shape for stimulating the G-spot and clitoris at the same time.
You can purchase this toy from here.